Van Schendel Petrus was born in Terheyden, near Breda, The Netherlands on April 21, 1806.

He studied at the Royal Academy of Fine Arts in Antwerp (1822-1828). He was a pupil of Mattheus Ignatius van Bree.

He worked in Antwerp from 1822 to 1828. He then returned to Holland where he worked in Amsterdam (1830-1832) and Rotterdam (1833-1838). In 1845, he settled permanently in Brussels. His studio there was divided into a well-lighted space where he actually painted and for his models to pose he had a darkened space. Thereafter he moved to The Hague where he remained until approximately 1850 before settling permanently in Brussels.

He was a member of the Amsterdam Royal Academy and the society ‘Arti Sacrum’ in Rotterdam. He exhibited at salons in Amsterdam, Antwerp, The Hague, Gent and Brussels where he was awarded a gold medal in 1845 for his painting ‘Market at Moonlight’.

Petrus was a Dutch-Belgian genre painter in the romantic style who specialized in nighttime scenes, lit by lamps or candles and landscapes with moonshine acting as the main source of light in the scene. This led him to being known as “Monsieur Chandelle”. He painted also traditional portraits and biblical scenes.

Great attention and care are needed to reproduce moonlight in its full effect. Technically it is one of the most difficult subjects to paint which is perhaps why so few artists specialize in it. Petrus van Schendel and Jacobus Abels were the two great masters of this art in the 19th century. Abels painted almost exclusively landscapes. His ability at portraiture further enhanced the beauty of these paintings and they were widely sought after. A few other candlelight scene painters such as Jan Hendrik van Grootvelt, Johannes Rosiere, and Michiel Versteeg were also good but Van Schendel was greater.

Today his evening scenes are very much in demand by collectors and museums alike. They can be found in museums in Holland and the rest of the world stretching as far as The Hermitage in Saint Petersburg.

The undersigned, Dr. Jan M.M. de Meere, author of the monograph on the life and work of the Dutch/Belgian artist Petrus van Schendel (1806-1870) declares herewith that the above reproduced painting, oil a mahogany panel, 24 x 30,2 cm, is an original work by the artist, painted in the last decade of his life, i.e. 1860-1870. The scenery depicts a river landscape by moonrise. In the foreground a rower in his boat with merchandise going to the right shore. In the middle of the river a small sailing vessel is slowly moving in the direction of the horizon with the upcoming moon. At the left river bank there is light behind the windows of the house. At the right shore there are trees and a house. The tree on the extended part of the river bank functions as a repoussoire, a setoff giving more depth in the composition. The way the light is treated by van Schendel is typically present in this painting: the whole sky in yellow, pink and violet tones with long brush strokes almost create an impression of a sunrise instead of the twilight zone with the upcoming moon. Despite the fact that this painting is not signed by the artist, there is no doubt whatsoever concerning the authenticity of this small work. It is not a study, it is a finished composition. The reason for not signing is probably due to the fact that it stayed in the studio of van Schendel and served as an example for similar compositions the artist made for moon rising subjects. After van Schendel death several paintings that where in his atelier did get later an apocryphal signature. This has not be done with this river landscape. A similar river landscape size was mentioned in van Schendel’s inheritance sale of 1881 (lot 91, ‘paysage avec rivière, lever de lune. See the enclosed CD-ROM in my book, appendix 12). More examples of river landscapes with the typical vertical strokes of clouds around the moon and in the sky together with the reflections of light in the water can be found in my book, pages 98, 99. Literature: Jan M.M. de Meere, Petrus van Schendel (1806-1870). Een leven tussen licht en donker. Uitgeverij Primavera Pers, Leiden 2012 Boutersem, 24 november 2012 Signature Jan de Meere 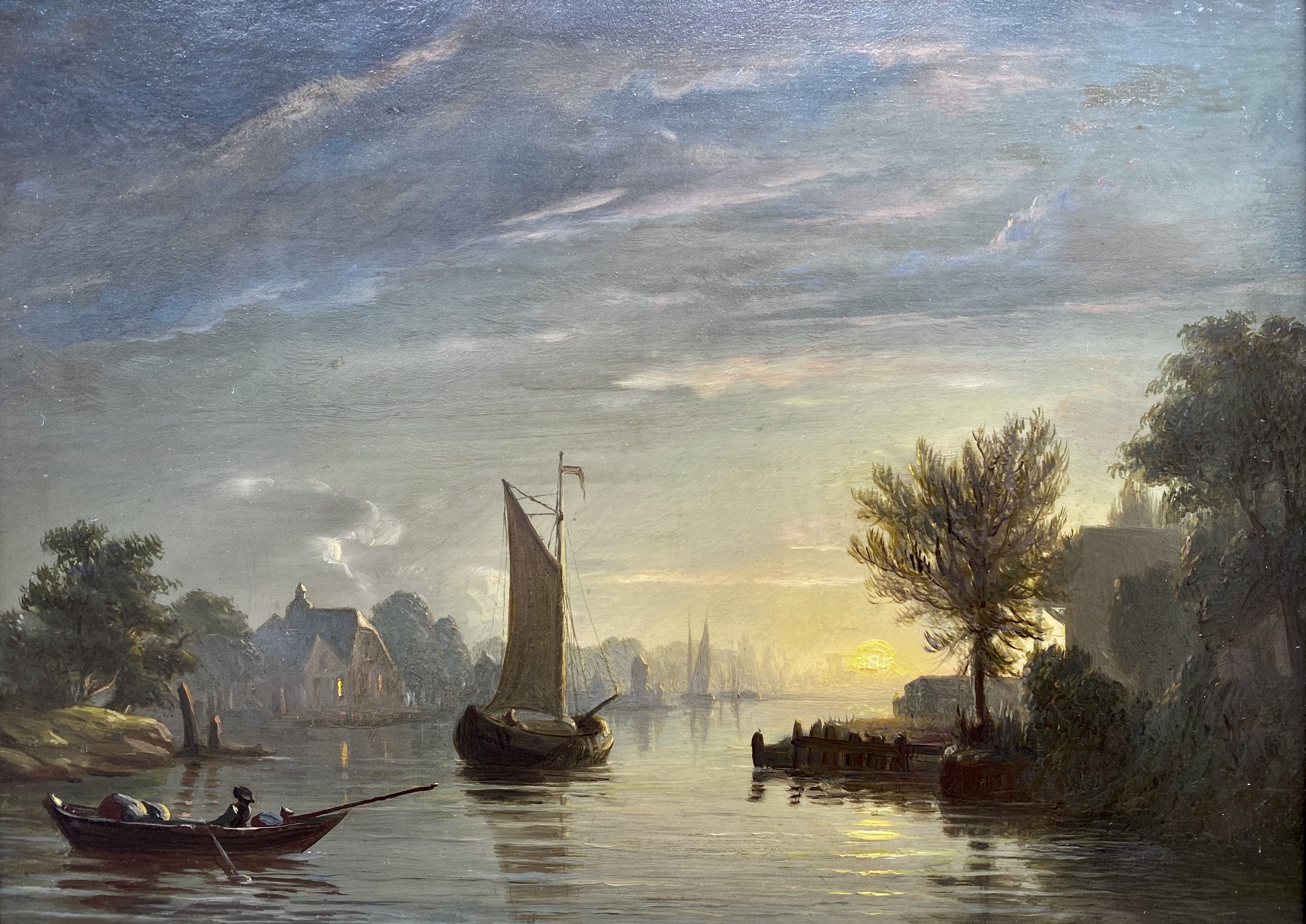