A Still Life with King’s Roses in a Basket

A Still Life with King’s Roses in a Basket

Mortelmans Frans was a painter of still lifes, flowers, fruits, landscapes, house interiors, marine views, beach scenes and portraits; also aquarellist and pastellist. He was born in Antwerp on 1 May 1865. He was the older brother of the famous Flemish composer-conductor Lodewijk Mortelmans (1868-1952).

For the promotion of his art with the wider public, Mortelmans regularly participated in exhibitions with other artists. The most important exhibitions were the Triennial Salons of Ghent, Antwerp and Brussels. He held sole exhibitions in the galleries Verlat, Lamorinière and Wijnen in Antwerp. In addition, he participated in group exhibitions organised by the Antwerp cultural associations; Arte et Labore and De Scalden, the art associations of Mechelen, De Hulst and De Distel (1906-1907). The Antwerp cultural association De Scalden, which had been founded in 1889 through the initiative of the sculpter-engraver Jules Baetes, attracted many talented enthusiasts. Like other cultural associations at that time, De Scalden promoted renewal and diversification in the arts. In 1902 they organised an exhibition of decorative art for the Museum of Arts and Crafts in Haarlem. The Scalden association continued to flourish until the the first world war and played an essential role in Mortelmans’ life.

In 1910 Mortelmans was initially appointed as professor of still-life painting at the Art Academy in Antwerp. Some of his outstanding students are Antoon Marstboom, Franck Mortelmans and Joris Minne.

Mortelmans’ subjects included arrangements with a wide variety of objects painted in a rigid style. But soon his style evolved with great virtuosity and elegance, rich in colours, without overloading the canvas. His work is generally decorative, in search of harmony. Working in his personal atelier, since 1892, he only painted in a very realistic style. As his art progressed, he added impressionistic touches.

In the domain where Frans Mortelmans excelled as a still life painter, it should be noted that this genre was part of vigorous artistic tradition in Antwerp. Notable fellow artists included Willem Linnig jr., Lucas Schaefels, and his pupil Jozef Van de Roye, Eugeen Joors, Edouard Chappel, Hendrik De Braekeleer and the French painter Marie-Antoinette Marcotte, who lived in Antwerp.

Today, Mortelmans’ work can be found in many private collections worldwide. Several museums own many paintings by Frans Mortelmans, including the Royal Museum of Fine Arts in Antwerp, the Antwerp Town Hall, the Museum of Flemish Cultural Life, the new Museum of Ostend Mu-zee, the Museum of Kortrijk, the Hof van Busleiden museum in Mechelen, and the Joselyn Art Museum in Omaha, USA. 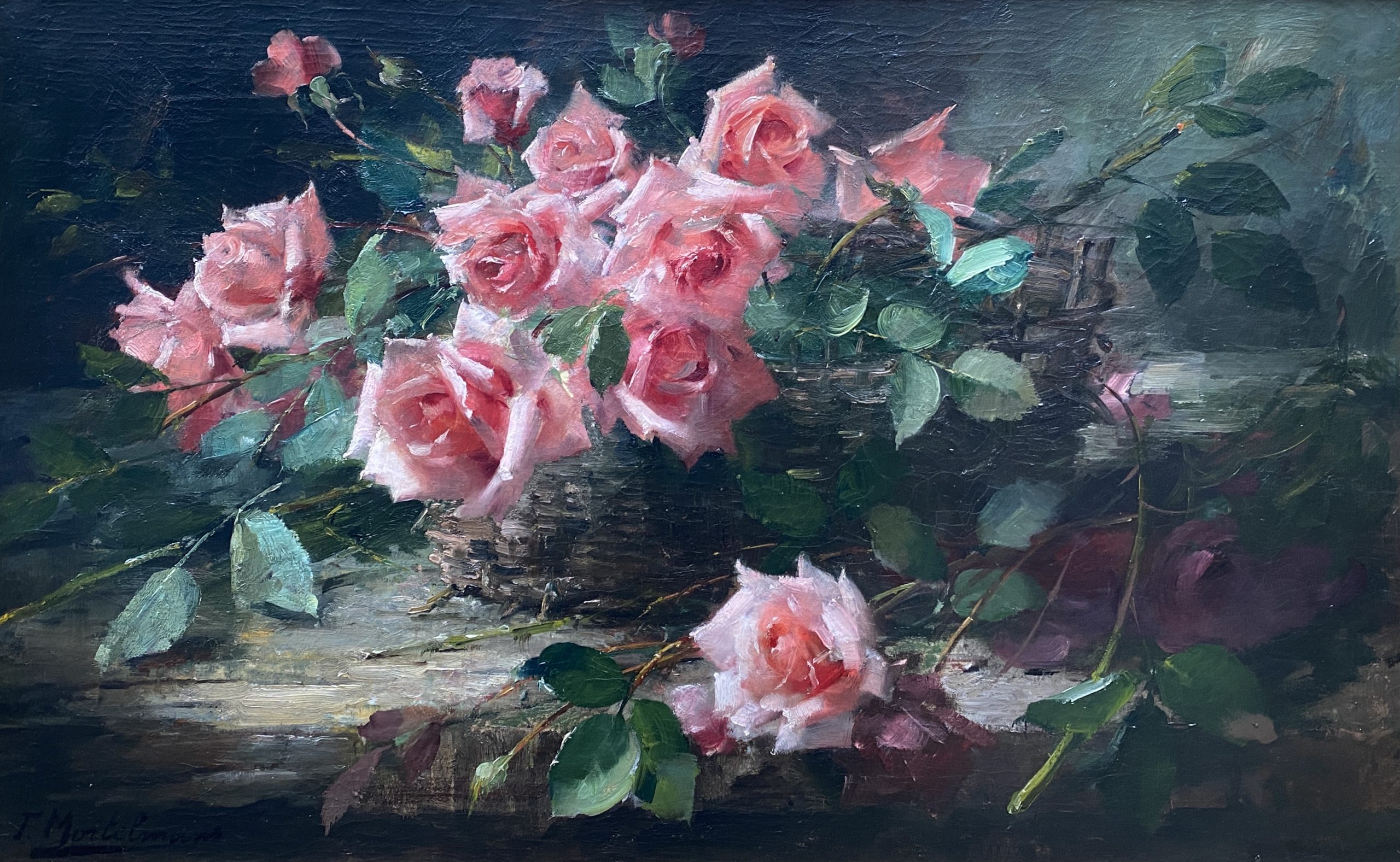